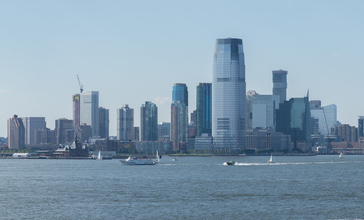 Jersey City, New Jersey skyline as seen from Governors Island in June 2017. by MusikAnimal is licensed under CC BY-SA 4.0

Jersey City is the second-most-populous city in the U.S. state of New Jersey, after Newark.

It is the seat of Hudson County as well as the county's largest city. As of 2016, the Census Bureau's Population Estimates Program calculated that Jersey City's population was 264,152, with the largest population increase of any municipality in New Jersey since 2010, an increase of about 6.7% from the 2010 United States Census, when the city's population was at 247,597, ranking the city the 77th-largest in the nation.

Part of the New York metropolitan area, Jersey City is bounded on the east by the Hudson River and Upper New York Bay and on the west by the Hackensack River and Newark Bay. A port of entry, with 30.7 miles (49.4 km) of waterfront and extensive rail infrastructure and connectivity, the city is an important transportation terminus and distribution and manufacturing center for the Port of New York and New Jersey.

Jersey City shares significant mass transit connections with Manhattan. Redevelopment of the Jersey City waterfront has made the city one of the largest centers of banking and finance in the United States and has led to the district being nicknamed Wall Street West.

Very convenient to travel , lots of recreational activities and parks to attend . Everything is traveling distance so it's easy to commute to actives or doctor's appointments, grocery store etc

This place is somewhat friendly due to the fact that people will always find a way to give you information you need.

Would you recommend Jersey City, NJ to your older friends and family?

Detailed reviews require a rating for each category. When you complete these category ratings, you help others better understand what makes Jersey City, NJ age-friendly.

Thanks for posting your Review. Will you help others understand what makes Jersey City, NJ age-friendly by providing a bit more detail to your rating?

Would you recommend Jersey City, NJ to your older friends and family?
Please tell us why or why not.