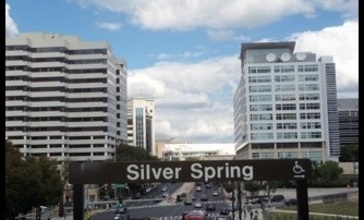 Images of Silver Spring, Maryland include the AFI Silver Theater, Veteran's Plaza and the civic building, the downtown area from the Metro station with the Silver Spring sign in the foreground, the former B&O rail station and Acorn Park, which is the site of a mica-flecked spring from which the community receives its name. by Farragutful is licensed under CC BY-SA 3.0

It had a population of 76,716 according to 2013 estimates by the United States Census Bureau, making it the fourth most populous place in Maryland, after Baltimore, Columbia, and Germantown.

The population density of this CBD area of Silver Spring was 15,600 per square mile all within 360 acres (1.5 km2) and approximately 2.5 square miles (6 km2) in the CBD/downtown area. The community has recently undergone a significant renaissance, with the addition of major retail, residential, and office developments. Silver Spring takes its name from a mica-flecked spring discovered there in 1840 by Francis Preston Blair, who subsequently bought much of the surrounding land.

Acorn Park, tucked away in an area of south Silver Spring away from the main downtown area, is believed to be the site of the original spring.

The city is generally conducive for both the young and the elderly given its relatively good access to public transport, community centers suitable for young and the old, public attitude and awareness on the needs of various age groups.

In general I can say the community have good accès for variable transportation . The environment is buzzy working place and mainly very socialize on different activities and also you get to see different ethnic

How did Maryland earn the grade of D+? We examined the state taxes based on how age friendly they are. Maryland has a state sales tax of 6.00%. Of particular interest is that Maryland does not have taxes on social security. There are estate taxes. There are taxes imposed on inheritance. Maryland has an effective property tax rate of 1.10%. Weighing these taxes and other taxes most likely to impact the aging population is how Maryland earned its state tax grade of D+.

Learn more about taxes in Maryland

Would you recommend Silver Spring, MD to your older friends and family?

Detailed reviews require a rating for each category. When you complete these category ratings, you help others better understand what makes Silver Spring, MD age-friendly.

Thanks for posting your Review. Will you help others understand what makes Silver Spring, MD age-friendly by providing a bit more detail to your rating?

Would you recommend Silver Spring, MD to your older friends and family?
Please tell us why or why not.