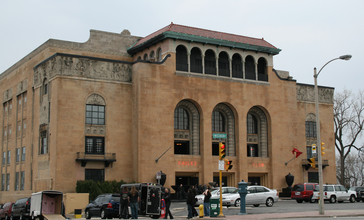 The Eagles Club, Milwaukee. I took this photograph and uploaded it on April 18, 2009. by Freekee at English Wikipedia is licensed under Public domain

The county seat of Milwaukee County, it is on Lake Michigan's western shore. Ranked by estimated 2014 population, Milwaukee was the 31st largest city in the United States. The city's estimated population in 2015 was 600,155.

Milwaukee is the main cultural and economic center of the Milwaukee metropolitan area. It is also part of the larger Milwaukee-Racine-Waukesha combined statistical area, which had an estimated population of 2,026,243 in the 2010 census. Milwaukee is also the second most densely populated metropolitan area in the Midwest, surpassed only by Chicago.

The first Europeans to pass through the area were French Catholic missionaries and fur traders. In 1818, the French Canadian explorer Solomon Juneau settled in the area, and in 1846, Juneau's town combined with two neighboring towns to incorporate as the city of Milwaukee.

Large numbers of German immigrants helped increase the city's population during the 1840s, with Poles and other immigrants arriving in the following decades. Milwaukee is known for its brewing traditions. The city is experiencing its largest construction boom since the 1960s. Major new additions to the city in the past two decades include the Milwaukee Riverwalk, the Wisconsin Center, Miller Park, an expansion to the Milwaukee Art Museum, Milwaukee Repertory Theater, and Pier Wisconsin, as well as major renovations to the UW–Milwaukee Panther Arena.

The under-construction Wisconsin Entertainment and Sports Center is scheduled to open in 2018.

I enjoy the vibe of people; it is trendy and there is a lot going on all the time. There are a few college campuses close by and it really makes for an interesting mix of people. The transportation in Milwaukee is great, with the bus and the hop, but a person could get anywhere they want in the city from here. There are also a lot of jobs, or places to work, restaurants, and other places. The schools down here, k-12 are all really good as well, private and public schools are both held in high regard.

hard to find a job

Learn more about taxes in Wisconsin

Would you recommend Milwaukee, WI to your older friends and family?

Detailed reviews require a rating for each category. When you complete these category ratings, you help others better understand what makes Milwaukee, WI age-friendly.

Your overall rating for Milwaukee, WI

Thanks for posting your Review. Will you help others understand what makes Milwaukee, WI age-friendly by providing a bit more detail to your rating?

Would you recommend Milwaukee, WI to your older friends and family?
Please tell us why or why not.