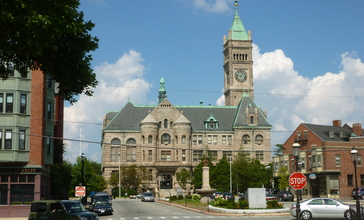 Lowell City Hall, located at 375 Merrimack Street Lowell, Massachusetts. Southwest side of building shown. Visible in the foreground is a raised island containing monuments to the city's early Greek immigrants, Cardinal O'Connell, and the city's Irish-American Community. by Emw is licensed under CC BY-SA 3.0

Lowell is a city in the U.S. Commonwealth of Massachusetts.

Located in Middlesex County, Lowell (along with Cambridge) was a county seat until Massachusetts disbanded county government in 1999. With an estimated population of 109,945 in 2014, it is the fourth-largest city in Massachusetts, and the second-largest in the Boston metropolitan statistical area.

The city is also part of a smaller Massachusetts statistical area called Greater Lowell, as well as New England's Merrimack Valley region. Incorporated in 1826 to serve as a mill town, Lowell was named after Francis Cabot Lowell, a local figure in the Industrial Revolution. The city became known as the cradle of the American Industrial Revolution, due to a large series of textile mills and factories.

Many of the Lowell's historic manufacturing sites were later preserved by the National Park Service to create Lowell National Historical Park. During the Cambodian genocide, the city took in an influx of refugees, leading to a Cambodia Town and America's second-largest Cambodian-American population.

Lowell is home to two Institutions of Higher Education: University of Massachusetts Lowell consisting of 6 Colleges offering more than 100 Undergraduate Majors, more than 40 Master's Programs and more than 30 Doctoral Degrees: Manning School of Business Kennedy College of the Sciences Zuckerberg College of Health Sciences Francis College of Engineering College of Fine Arts, Humanities and Social Sciences College of Education as well as Middlesex Community College offering both credit and non-credit programs of study.

The food is good

I've grown up with my grandparents present my whole life. I've also have worked with elders, disabled and people with mental problems. I've always enjoyed working with all types of people.

Learn more about taxes in Massachusetts

Would you recommend Lowell, MA to your older friends and family?

Detailed reviews require a rating for each category. When you complete these category ratings, you help others better understand what makes Lowell, MA age-friendly.

Your overall rating for Lowell, MA

Thanks for posting your Review. Will you help others understand what makes Lowell, MA age-friendly by providing a bit more detail to your rating?

Would you recommend Lowell, MA to your older friends and family?
Please tell us why or why not.